The Russian dissident writer Aleksandr Solzhenitsyn linked the power of truth with a call for non-violent resistance in a 1974 essay, “Live Not by Lies”:

When violence bursts onto the peaceful human condition, its face flush with self-assurance, it proclaims on its banner, “I am Violence! Make way, I will crush you!” But violence ages swiftly. A few years pass and it is no longer sure of itself. To prop itself up, to appear decent, it will without fail call forth its ally — Lies. For violence has nothing to cover itself with but lies, and lies can only persist through violence.

Writes Anabaptist World editor Paul Schrag: “Lies are a despot’s essential tool and greatest weakness. Solzhenitsyn called for exploiting this frailty ­peacefully. If Russians ­refused to ‘patch together [Communism’s] decomposing garb,’ the fearsome but hollow regime would collapse. He was prophetic.” 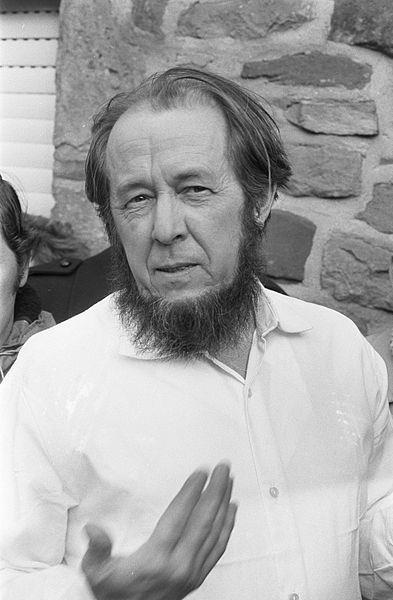 In the work of ministry and social change we do well to remember the Psalmist did not say "be busy and know that I am God," but to "be still" (Psalm 46). "Deep breath moments" remind us how to live into that.

Select a link to read more:

The world lost another great peacemaker in January when Buddhist monk Thích Nhất Hạnh passed away at age 95. Nhất Hạnh was exiled from Vietnam after opposing the war in the 1960s. He influenced the American peace movement and urged Dr. Martin Luther King Jr. to oppose the Vietnam War (which King eventually did). Nhất Hạnh became a leading voice in applying Buddhist principles to political and social reform through nonviolent life and action.

Thích Nhất Hạnh lived the prophetic power of gentleness. At the beginning of his bestselling book Being Peace he wrote: “Life is filled with suffering, but it is also filled with many wonders, such as the blue sky, the sunshine, the eyes of a baby. To suffer is not enough.” He also writes, “If in our daily life we can smile, if we can be peaceful and happy, not only we, but everyone will profit from it. This is the most basic kind of peace work.” 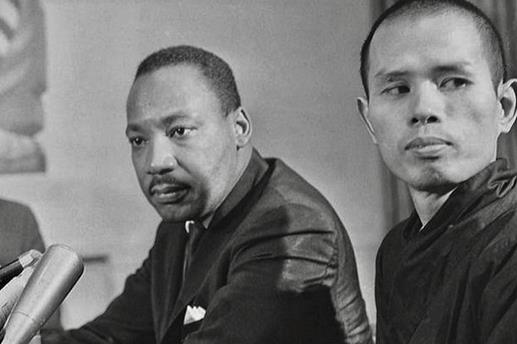 Was there really no room for Mary and Joseph in the inn? Scholar Ken Bailey, author of Jesus Through Middle Eastern Eyes, calls us to strip away the mythology to see how Jesus’ birth was welcomed at the margins. In the verse “There was no room for them in the inn” (Luke 2:7), “inn” should be translated “guest room.” In the culture of Palestine in Jesus’ time, hospitality to strangers was held in the highest regard, and even poor peasant families reserved the entry area of their small homes for guests – an area where they normally brought their precious animals for protection at night. Some also had a small extra guest room, as did the family that welcomed Mary and Joseph. According to Bailey (see the illustration below), “the holy family traveled to Bethlehem, where they were received into a private home. The child was born, wrapped and … ‘put to bed’ … in the living room in the manger that was either built into the floor or made of wood and moved into the family living space. … The guest room was already occupied by other guests. The host family graciously accepted Mary and Joseph into the family room of their house. … The village midwife and other women would have assisted at the birth. After the child was born and wrapped, Mary put her newborn to bed in a manger filled with fresh straw and covered him with a blanket.”

Jesus was born, writes Bailey, in a “warm and friendly home, not in a cold and lonely stable,” in “a simple two-room village home such as the Middle East has known for at least three thousand years.” Bailey concludes: “Yes, we must rewrite our Christmas plays, but in rewriting them, the story is enriched, not cheapened.” (See here for more, and why the lowly-regarded shepherds were so joyful.) 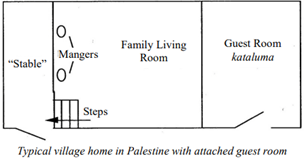 From the U.S.’s Vietnam War to the global spread of nuclear weapons, poet Denise Levertov often spoke up at times of world crisis – yet with a voice that felt activism alone could not bring deep solutions. In her poem “Let Us Sing Unto the Lord a New Song,” Levertov writes that only when revolution and poetry mesh, does “the singing begin.” Here’s an excerpt:

and if its beat
falter
life itself shall cease.

and if that pulse
grow faint
fever shall parch the soul, breath
choke upon ashes.

For those worn out by the urgent challenges of the “now,” the poem “Primary Wonder” by Denise Levertov has the power to interrupt. Levertov (1923–1997) was born in England to a Welsh mother and a Russian Hasidic father. She moved to the United States in 1948. She was deeply involved in the peace movement, and later in life she converted to Christianity. Her poems on religious themes are collected in The Stream and the Sapphire. What is different when our busy lives and work are grounded in the “quiet mystery” she speaks of?

Days pass when I forget the mystery.
Problems insoluble and problems offering
their own ignored solutions
jostle for my attention, they crowd its antechamber
along with a host of diversions, my courtiers, wearing
their colored clothes; cap and bells.
And then
once more the quiet mystery
is present to me, the throng's clamor
recedes: the mystery
that there is anything, anything at all,
let alone cosmos, joy, memory, everything,
rather than void: and that, O Lord,
Creator, Hallowed One, You still,
hour by hour sustain it.

Using a 3-D model of the sanctuary of Bethel Gospel Assembly in Harlem, New York City, the New York Times created an online experience of choir members singing “It Is Well With My Soul.” Be sure to listen to the end of the song - the wait is well worth it.

(Note: The 3-D experience may take longer to load on slower devices or network connections. Scroll down through the wonderful photos, and wait for “Start with 3D Audio” to appear.)

Here is the Times’ introduction: “Last March, as New York City became the epicenter of the coronavirus pandemic, churches in Harlem closed their doors and silenced their choirs. For many churches, this was the first time in their histories that choirs were not able to sing together, in person, on Sundays. At churches like Bethel Gospel Assembly,​​ ​​worship without music was never an option. So​ leaders found a way to bring the music back. This is what it sounds like.”

(Deep breath moment from our May 2021 Newsletter)

“The Romero Prayer,” written by a priest inspired by the witness of Archbishop Oscar Romero of El Salvador.

“We cannot do everything, and there is a sense of liberation in realizing that.”

What a gift those words are. Read them again, slowly. They are from “The Romero Prayer,” written by a priest inspired by the witness of Archbishop Oscar Romero of El Salvador. In the 1970s, in the face of government injustice and violence, Romero led the church and everyday people into the public square with moral courage. He paid the price, shot and killed inside a church while he celebrated holy communion. Declared a saint by the Catholic Church in 2018, Romero’s memorial day is March 24 (the anniversary of his death). In the face of great challenges in our lives and the world today, may the closing words of the Romero Prayer be a gift to you.

We cannot do everything, and there is a sense of liberation in realizing that.
This enables us to do something, and to do it very well.
It may be incomplete, but it is a beginning, a step along the way, an opportunity for the Lord's grace to enter and do the rest.
We may never see the end results, but that is the difference between the master builder and the worker.

We are workers, not master builders; ministers, not messiahs.
We are prophets of a future not our own.

See the full prayer here, a video of the prayer set to music from Taize, and a moving video of Romero speaking here.

“32 Bright Clouds: Beethoven Conversations Around the World” commissions new works from composers in 32 countries of conflict. This includes countries where MCC serves such as Afghanistan, Colombia, Myanmar, and Syria. Curated and performed by Israeli-born pianist Yael Weiss, each composition is unique to each country, yet all are united by a single “Peace” motif from Beethoven's Missa Solemnis. “Music is a wonderful language for bringing people together,” says Weiss. “And [this] project is using the power of music to express our unity, our shared humanity and the global aspiration for peace." In celebration of the 250th anniversary of Beethoven’s birth, the compositions were performed in a December 16, 2020 live marathon event you can watch here.

Worldwide quarantines have released gifts of music produced during lockdown which speaks to our time. Two gifts we’ve heard: “Brother,” featuring the hip hop and spoken word artist Propaganda. Starts slow, but hold on … See another moving version here. Also, “Sing Gently," from a virtual choir of 17,562 different singers from 129 countries. One of the singer’s comments speak to what our world so desperately needs today, "You somehow need to learn how to breathe together, how to listen to each other, how to blend with each other and how to communicate as a collective." May it be so.

“Sustained by the Spirit: Churches in the City Respond to COVID-19" is a project developed by City Seminary of New York listening to what is taking place on the ground across the world, and sharing what churches are beginning to learn. Read these inspiring stories of communities being sustained in love, hope, and lament, and becoming signs of generosity, resilience, and compassion.

(Deep breath moment from our May 2020 Newsletter)